This is a short repot on the overlap of twitter user on Raw/SDLive/NXT.

(I'm sorry for my poor English.)

I tallied the tweet, retweet and user number which posted with hashtags #raw, #SDLive and some hashtags related on NXT TV show with Twitter API.
I tallied these numbers for one day that TV show was broadcasted (9.16 for raw, 9.17 for smackdown and 9.18 for NXT).

Comaparison of some hashtags related on NXT TV show 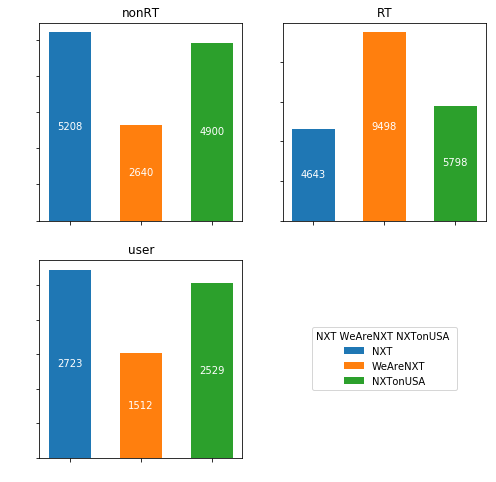 In the follwing, I used the user data tallied on #NXT for the data of "NXT" because the number of users are largest. 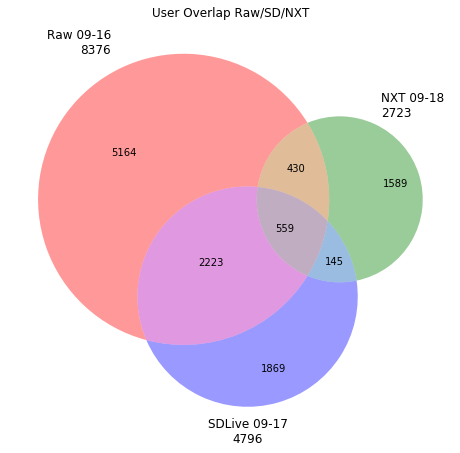 Upper figure shows the Venn diagram between the users who post tweets on #raw, #SDLive and #NXT in each broadcasted day.
Total number of users was 11,890.
From this diagram, half of users just posted on #raw and only 5% of users posted on all three hashtags.
The number of users posted on #NXT was 2,723 and it is about 33% of #raw users and 57% of #SDLive users.
This number may increase next week because only the first half of NXT show is broadcasted on USA network and full show will be broad casted on USA next week.

From Venn diagram, start of NXT TV show increases 1,589 users who post tweets related on WWE and it is equivalent with 15% of raw and SDLive users.